Use of Fertility Awareness (NFP) After Early Pregnancy Loss 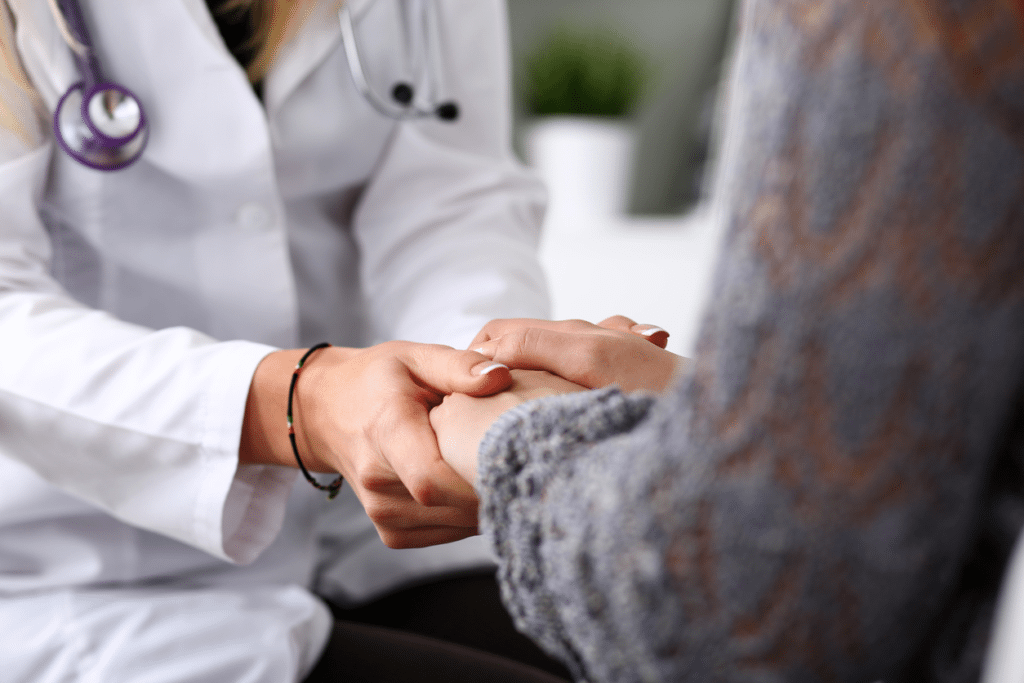 For the purpose of this review, EPL is defined as up to and including 12 weeks of pregnancy. It is within that time period, or soon after, that NFP providers will most likely be confronted in helping women cope with EPL. Charting or natural family planning (NFP) can be useful in providing predictors of EPL and for the diagnosis and treatment of EPL. The NFP provider, however, is most often challenged in how to help the couples use NFP post EPL. NFP users want to know when or how long it takes for fertility to return post EPL, when to resume intercourse to prevent or achieve pregnancy post EPL, and when to start observing and charting signs of fertility after they have experienced an EPL.

An indication for a return to fertility after an EPL is when a woman’s human chorionic gonadotrophin (hCG) levels return to normal levels. hCG is the hormone that is produced by the human embryo after fertilization. It is the hormone that is measured in home urine pregnancy tests. And, hCG’s continued rise indicates a healthy pregnancy (Heffner and Schust 2014). If the levels of hCG in the urine are less than 5mIU/ml, it means the test is negative for pregnancy. Most women can expect their levels to return to a non-pregnant range in about four to six weeks after an EPL. Health care providers commonly will monitor hCG levels after an EPL to ensure they return back to <5.0 IU/mL. The highest levels of hCG occur from 8 to 10 weeks of gestation, and thus, when an EPL occurs during that time period it may take longer for hCG levels to return to level and for fertility to return.

Generally speaking, it takes one to two full months for a woman to have her menstrual cycle return after experiencing a miscarriage. One study found on the basis of the endocrine data (i.e., daily urine measures of estrogen, LH, and progesterone) that among 18 women following an EPL, ovulation occurred in all 18 women in the cycle prior to first menses at a mean of 29 days post-partum (range 13-103 days) (Donnet, Howie, Marnie, Cooper, and Lewis 1990). They also found that the mean luteal phase length of 12.9 days in the first cycle was shorter than the mean of 14.4 days in the second cycle. Another study found among 50 patients with pregnancy loss that the average time to the return of ovulation, as diagnosed by histological findings of the secretory endometrium, was 50 days (range 10 to 104 days) (Ratten 1970). These findings show that, although there is some disturbance of endocrine function in the first cycle after an EPL, the majority of women have a rapid return to ovulation and thus the early use of NFP or abstinence would be necessary for those wishing to avoid pregnancy.

Researchers at Marquette University are developing a data set of women with EPL and who chart their menstrual cycles in an online NFP charting system (Fehring and Schneider 2016; see example chart of an EPL in Figure 1). Chart data from 10 women with an EPL who used an electronic hormonal fertility monitor to observe their fertility, detect the LH surge, and the return of fertility, found that the average day of the first LH surge (and assumed ovulation) post EPL was 76.2 days (Range, 34 –119 days). The mean length of the first cycle post EPL was 33.9 days (Range, 28-42 days) with a luteal phase length of 11.9 days (Range, 4-19 days). The second menstrual cycle post EPL had an average length of 28.0 days (Range. 26-30 days) and with an average luteal phase of 12.3 days (Range, 9-14 days). It is obvious from this data that there is a lot of variability in the return of fertility post EPL. The data also shows that parameters of the menstrual cycle normalize quickly, i.e., by the second cycle post EPL. These parameters are similar to what Donnet, Howie, Marnie, Cooper, and Lewis (1990) found, in that the parameters of the menstrual cycle (i.e., length, and luteal phase length) normalize by the second cycle post EPL. Larger data sets of post EPL menstrual cycle charts however, need to be gathered and analyzed to have a clearer picture of this variable return to fertility and to determine what other factors affect this variability, such as how many weeks of pregnancy when the EPL occurred.

There is also the question as to when couples should try for pregnancy after an early pregnancy loss. There is a wide divergence of opinion concerning the interval a woman should wait after a miscarriage before attempting a new pregnancy. Waiting a full two months, or for a complete and normal menstrual cycle (which generally takes about two months), ensures that the pregnancy hormone hCG has dipped to levels so low that it’s undetectable. It also makes it more likely that the luteal phase will be long enough and the uterine lining has returned to normal, making it receptive to receive a future human embryo. There is a concern that women need to wait 3-4 months in order to reduce the risk of another miscarriage. One study found among 91 women post EPL that 19 women conceived within the first 12 weeks with no spontaneous abortions (miscarriages), and 18 pregnancies proceeded normally; 30 women conceived between 12 and 26 weeks, 29 pregnancies proceeded normally, and none miscarried; and 42 women conceived later than 26 weeks after the miscarriage, with 7 pregnancies terminated in miscarriage, and 30 proceeded normally (Rud and Klünder 1985). These authors found no reason to advise women to postpone a new conception after an EPL. Another study investigated whether a longer pregnancy interval lowers the risk of repeat miscarriage and/or prematurity (Wyss, Biedermann, and Huch 1994). Results showed that there was no evidence to recommend a waiting period between an EPL and a subsequent pregnancy. They found that the risk of another EPL was around 20% irrespective of interval duration. Prematurity too was not influenced by a waiting period after an EPL. Finally, Davanzo, Hale, and Rahman (2012) found that the shorter the time following a miscarriage, the more likely the subsequent pregnancy is to result in a live birth. Hence, it seems reasonable to attempt conception soon after an uncomplicated miscarriage in otherwise healthy women depending on their desire.

A common recommendation for use of NFP after miscarriage is to abstain from intercourse until the first menses, which will be in about four to six weeks after the miscarriage. Women NFP users may observe and chart signs of fertility until then. The body temperature most likely will be elevated for some time due to hCG levels but gradually return to baseline (Couple to Couple League 2007). Others recommend avoiding genital contact for four weeks while leaning to develop confidence in observing natural signs of fertility (i.e., cervical mucus changes) and to begin to have intercourse only at the end of the day on dry mucus days through the first menstrual cycle post miscarriage (Hilgers, Daly, Hilgers, and Prebil 1982). Another NFP text indicated to wait to have intercourse until the Symptom-Thermal rule has been met i.e., experiencing a significant temperature shift and waiting for three temps post the shift above the baseline (Fuller and Huetner 2000).There are no studies on the effectiveness of NFP methods in helping women/couples to avoid or achieve pregnancy post EPL.

A conservative approach to avoiding pregnancy after an EPL would be to wait until the woman has her first menses and then wait until they have established the end of the estimated fertile phase by use of the body temperature shift, the cervical mucus Peak day, or an LH surge. After the first menses they could also follow the instructions for using cervical mucus or urinary estrogen changes to estimate the beginning of the fertile phase and then follow normal instructions for avoiding pregnancy. Post EPL couples can be informed that it might take some time for the first ovulation and first menses to occur. They can also be instructed that the first menstrual cycle will most likely have a delay in ovulation and a shorter than normal luteal phase. The menstrual cycle should return to normal functioning by the second cycle post EPL.

In summary, the following represents current understanding about return of fertility post EPL and NFP use: 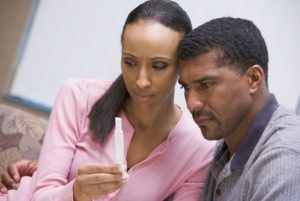 The biggest challenge with the use of NFP post EPL is coping with the unknown time of abstinence during the wait for the first menses post EPL. This time period could be very short but also 100 days or more. One approach could be to use periodic hCG home urine pregnancy tests, and as long as they are positive, the couple would not have to worry about pregnancy. The level of hCG detection in home pregnancy tests is around 20-25 IU/mL, a level that would ensure that pregnancy is not possible. Another option is to use postpartum NFP protocols that various NFP providers have developed; however, most of these protocols are not very effective with postpartum breastfeeding women (Bouchard, Schneider, and Fehring 2013). More research on the variability of the return to fertility and the effects on the menstrual cycle is needed. There is also the need to test the effectiveness of NFP protocols post EPL as well.

Republished from Current Medical Research [Winter/Spring 2017 Vol. 28 Nos 1 & 2] with permission from the USCCB.