How do fertility awareness based methods affect couple intimacy?

This post is a synopsis of the research presented in the article published in the Journal of Nursing Scholarship. It is a post in a series entitled Featured Research where we go back and break down some of the foundational research about different fertility awareness based methods (FABMs). We hope after reading this post you are inspired to check out the original research article to read the complete study! A longer list of research is also available here.

The study for today’s Featured Research surveyed married men and women who use modern natural or fertility awareness based methods (FABMs) (referred to in this study as natural family planning or NFP), about the self-reported positive and negative effects the use of these methods had on their marital intimacy and relationships with their spouses. This study was the first of its kind since studies published over 40 years ago by Crowley and Crowley (1966) and Marshall and Rowe (1970). The 2003 study’s results convey an overwhelmingly positive response (74% of total responses reported), showing greatly improved satisfaction as compared to the Crowleys’ study which claimed that natural systems and the necessary abstinence caused greater harm than good on relationships. The results of the earlier study could have been due to more antiquated FABMs being less effective and requiring more frequent abstinence.

What were the self-reported advantages and disadvantages of FABMS on marital intimacy?

Couples who participated in the 2003 study were asked to respond independently to the following open-ended questions: How did NFP help and how did NFP harm the marriage?

Couples self reported: How did NFP help and how did NFP harm the marriage?

More than 600 individuals shared well over 2,000 comments. As noted, the overwhelming majority of these comments were positive (74%). Among the benefits cited four main themes emerged: enhanced relationships, improved knowledge, enhanced spirituality and success with the method. Disadvantages cited included strained sexual interactions, worsened relationships, and problems with the method. 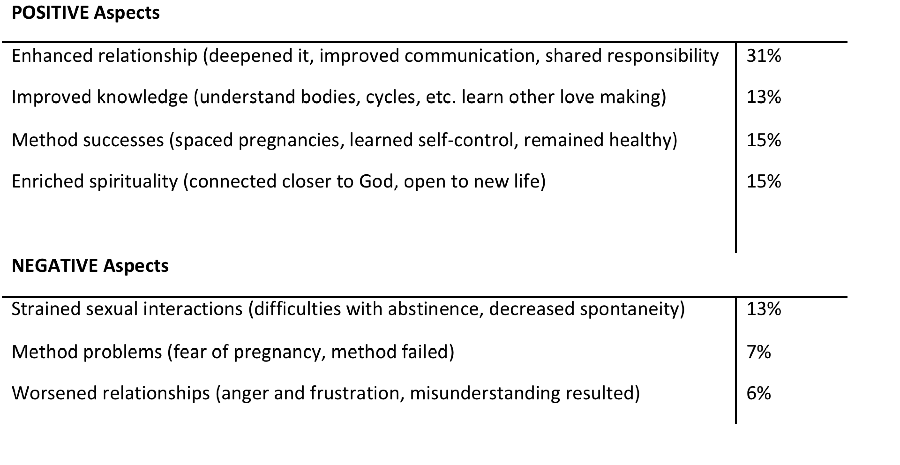 What should we take from this study?

The results demonstrate that men and women using modern FABMs are deeply satisfied for a variety of reasons including the positive impact on marriages, their self-awareness regarding health, and their confidence in trusting the systems for reliable family planning. There are many concerns that health providers have that women and couples are not interested in these methods due to the consequences of behavior modification. The  benefits reported in this study warrant further consideration of these methods by women and physicians alike. There is a crucial need for medical professionals to incorporate this information into their practices and present FABMs as legitimate family planning option, as well as a tool to understand more about a woman’s health, while incorporating the advantages and disadvantages reported here. Read the full length article here!

Liz Escoffery, FCP is a FertilityCare Practitioner and the founder of Indy FertilityCare. She has been working with women and couples wanting to learn the Creighton Model of FertilityCare locally and long-distance for the past 2 ½ years. She earned a Bachelor of Arts in Political Science from the University of St. Thomas in 2011 and is currently pursuing a Master of Arts degree in Theology at St. Meinrad.